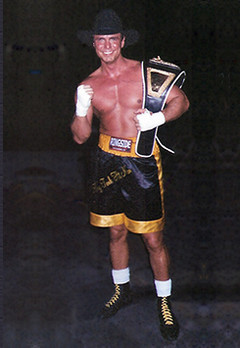 A man moves to Nashville, Tennessee, from Little Rock, Arkansas, to pursue his lifelong dream of becoming a country music star. After living out of his car for a week, he ventures into the world of professional boxing to make a living with the encouragement and guidance from the late former Heavyweight Champion of the world, Greg Page and Light-Middleweight contender Nick Rupa. Much to his own surprise, he wins bout after bout, and eventually a world championship before going on to release a popular country record. How did he do both? "I'm the son of Golden Gloves boxing hall of fame Ray Rodgers and the great grand-nephew of country music hall of fame Jimmie Rodgers. “I guess it was in my DNA to do both.”

This is not some sports underdog screenplay from the creative mind of a Hollywood producer. It is the life story of Mike Rodgers, a former country music singer and professional boxing champion who overcame all odds to achieve success in boxing, music, and life.

Rodgers drove into town with a beat-up car, a guitar, three garbage bags full of clothes, and a great big dream. He met Vern Gosdin his first night in Nashville and told him, “Meeting you has got to be a sign from God I’m supposed to be here.” Vern just smiled and said, “I hope so kid.” Vern told Mike years later, “It’s a good thing you’re a boxer and a singer because this town will beat the hell out of you.” Truer words were never spoken.

The story of his professional boxing career is nothing short of legendary. Upon his arrival, Rodgers learned about weekly professional boxing shows held at the notorious Music City Mix Factory promoted by Jimmy Adams and Don King. Because he hadn’t found an apartment yet, Rodgers’ first professional boxing license bears the address of a local honky tonk bar. He still keeps that license in his wallet to this day as a reminder of how far he has come.

Rodgers entered the boxing ring wearing a pair of tennis shoes, swimming trunks and a cowboy hat that became his trademark. The reason he wore them was because he refused to pay the rental fee charged to all opponents who needed trunks and boots. Before his introduction, a drunk in the crowd yelled: "Hey cowboy, who are you supposed to be, the Honkytonk Hitman?" Mike savagely knocked out his 6'6" opponent during the very first round and the crowded exploded in cheers, the nickname stuck and the legend of the “Honkytonk Hitman” began.

The promoters thought Mike would serve as a tomato can, a mere opponent for protected prospects, unaware of his extensive amateur boxing career (155 wins - 26 losses) in which he compiled numerous State and Regional Golden Gloves titles years earlier. Instead, the underdog became the crowd favorite and a local folk hero in Nashville after kayoing a string of foes in dramatic fashion. As his song “Honkytonk Hitman” tells his fans, he fought his way up the boxing ranks ‘fighting and singing.”

The club fighter with the knockout punch quickly became a legitimate contender in boxing as his notoriety grew. Rodgers performance in the boxing ring along with his “leading man” looks definitely helped grow his large fan base, but it was his charismatic personality and quick wit that led to his interviews on radio, television, and covered in magazines like “Ring” and “International Boxing Digest”, while also featured in published books like “Boxing’s Most Wanted”, “Fight the Good Fight”, and “The Encyclopedia of Combat Sports”. His “Honkytonk Hitman” persona was even showcased on the front page of the sports section in a featured article for “The Tennessean” newspaper in Nashville.

Mike Rodgers went from fighting in bars and fairgrounds to filled arenas on cards for HBO Boxing. Legendary boxing trainer of Mike Tyson, Kevin Rooney, worked Rodgers’ corner the night he reached the pinnacle of his boxing success by viciously destroying Art Jimmerson in a 2nd round KO to win the WBF World Cruiserweight Championship. Those knowledgeable about combat sports may know that Jimmerson was not only a world class boxer but also the first professional opponent in the octagon for mixed martial arts legend Royce Gracie back in the first UFC.

The record sold several thousand copies in the U.S. with even more sold overseas. Rodgers traditional country music and dynamic live performances helped further his fan base around the world with his retro Bakersfield sound supporting his rich baritone vocals singing songs he either wrote or co-wrote such as the popular “Honkytonk Hitman”, “Me, Jack, and Jesus”, and “She’s a Sad Country Song” while opening for legendary acts like Merle Haggard, David Allan Coe, and many others. Country Weekly Magazine quickly named Rodgers their "Who's New" artist.

Despite the increasing momentum in his music career, Rodgers chose to stop pursuing it because of the time sacrificed away from his wife and two young daughters and assuming custody of his son from a previous marriage who came to live with them.

In 2008, Rodgers opened a boxing gym free for all children who make good grades, participate in community service, utilize good manners, and don’t get in trouble at school. If the children abide by Rodgers code of conduct he would provide them with a facility, equipment, uniforms, and coaching, free for their good efforts. The program is still running strong today.

Today, Mike Rodgers is happily married, a devoted father of three, and a successful Business Executive living outside of Nashville.